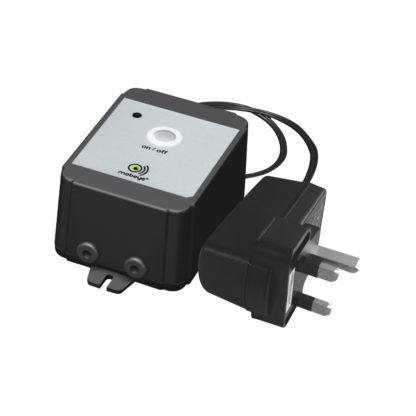 The Mobeye PowerGuard CM2100 is a powerful and compact GSM alarm module to monitor power outages and the floating inputs. In an alarm situation, the PowerGuard will alert (SMS and / or call) to preset telephone numbers (up to 5 contacts can be stored).

The Mobeye PowerGuard has a 12VDC power input and two floating inputs. In an alarm situation, the PowerGuard will alert (SMS and / or call) to preset telephone numbers (up to 5 contacts can be stored). You easily connect the (in the package included) mains adapter, insert the (also included) SIM card and batteries, and you’re almost finished with the installation. By one simple step you add the alarm telephone number(s) that need to be informed about the power failure. 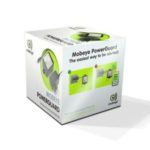 The floating alarm inputs can be used to monitor other sensors, such as magnetic contacts, float sensor, machine failure signals, etc. Any sensor with a normally open or normally closed contact can be connected. Once the sensor gets in alarm status the contact persons will be informed. User-defined text, delay times, and other options can be set.

The power failure alarm is equipped with an integrated GSM dialler. It is a user option to insert an “own SIM” and get SMS text message and/or calls straight from the unit, or to register the device in the Mobeye Internet Portal using the Mobeye SIM. For more information, see under the “SIM info” tab.

The Mobeye PowerGuard UK runs on a 12V DC power source (e.g. battery), or via the supplied mains adapter, which is suited for the UK and other countries that have a 230 V, 50Hz net with the “G type” power plug (see pictures). As soon as the power fails, the batteries take over the operation; once the unit has informed the contacts persons the GSM module goes into standby status. The unit will still monitor the inputs. If anything happens, it will establishes network connection again to send alarm messages. Without external power, it can still work on batteries for more than a year. Once the power source returns, a recovery message is sent and the GSM module will remain connected to the network.

Typical applications for the Mobeye PowerGuard

The Mobeye PowerGuard is designed to warn you in situations of power outage. Several reasons can cause a power failure. For those situations where the availability is critical, receiving a power failure alarm can save a lot troubles. It is hardly impossible to list all examples of applications in the field, but just imagine the effect of a sudden lack of power in your own situation.

Typical applications are monitoring devices such as

But even if the power itself is not the main concern, the Mobeye PowerGuard power failure alarm UK is a strong tool with its two normally open or normally closed alarm inputs. Any device can be monitored. For these situations you can also apply the Mobeye CM-Guard; the PowerGuard has the advantage that the mains adapter is included.