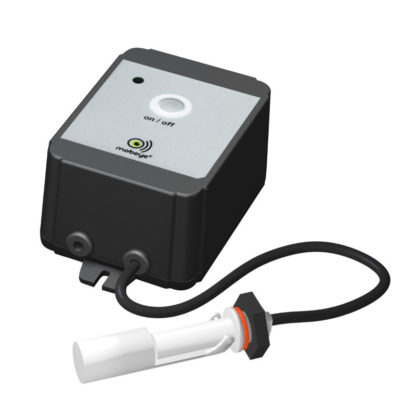 The Mobeye WaterGuard-FS is a battery-powered GSM water detector. It may also work on 12VDC (or AC adapter). The water sensor activates by water-based liquids and reports this to the set telephone numbers (max. 5). The GSM module sends a text message and / or call.

Alerting on a certain water level can be very convenient and helps to avoid trouble. The Mobeye WaterGuard-FS can alert you when the water rises or drops below a certain level. As soon as the sensor probes detect any water based fluid, the wireless float switch alarm will send an alert via telephone call and SMS message.

The Mobeye CM2300FS is a battery-powered water detector. This detector operates completely autonomously by the built-in GSM module and battery. It may also work on 12VDC (or AC adapter). The float switch closes (or opens) by water-based liquids and reports this to the set telephone numbers (max. 5). The GSM module sends a text message and / or call.

The float switch alarm unit can also be used in reverse to inform when water level drops below the switch.

In addition to the float sensor one more external sensor can be connected. This additional input may be set to “normally closed” or “normally open”. This allows each sensor with a dry contact, for example, a second float level switch.

Although the Mobeye WaterGuard is designed for low power consumption and operates more than a year on one set of batteries, it is also possible to connect the module to an external power source. Through a (regulated 500mA) adapter the module can run on the regular power supply. In case of a power outage the back-up batteries take over the operation. If desired, power outages are reported as an alarm message.

A Mobeye SIM card is included (Mobeye M2M for connection to the Mobeye Internet Portal). Alternatively any other SIM card can be used.

Users reported to be happy to use the WaterGuard-FS in the water tank of their holiday homes, at the Spanish islands. Before they had a contract with the water company, to supply new water weekly to be sure that the tanks are alway full enough. Using the Mobeye WaterGuard it is the WaterGuard that calls the water company automatically when the water drops below the minimum level. This saves lots of money and increases the reliability of the presence of water.

Construction sites often build below the ground water level. This means that water pumps need to pump until the ground floor has been closed. Practice proves that the pumps can fail and unfortunately this can cause a lot of damage. It is so easy to install a WaterGuard with float sensor just above the sensor of the pump. Once the pumps falls out and the water rises, the contact persons receive a warning per telephone. This already saved a lot of trouble for our customers.

Many reports we received from boat owners, who told that the WaterGuard prevented their boat from sinking.  Problems with the discharge of bilge water and too much rain were mentioned as main reasons. A simple alert system informed the owner to take action.