Being one of the best smoke detectors in the world the Ei Electronics Ei605TYC can be used at home and in clean situations. Based on the original drawings Mobeye® has developed a GSM communicator to be combined with the Ei smoke alarm Ei605TYC.

Being one of the best smoke detectors in the world the Ei Electronics smoke alarm Ei605TYC can be used at home and in clean situations. Based on the original drawings Mobeye® has developed a GSM communicator to be combined with the Ei605TYC smoke detector. 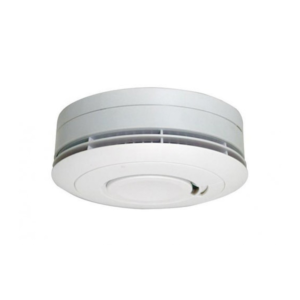 The Ei Electronics Ei605TYC is an Optical Smoke Alarm using the light scatter principle, giving a quick response to all standard domestic fire types. The Ei605TYC has a non replaceable 10 years lithium battery.

The smoke detector will activate the built-in sounder upon sensing smoke particles. It will automatically reset and silence the alarm when the smoke particles are no longer present in the room.

The built-in sounder will provide a minimum sound output of 85dB at 3m.

The red indicating LED will flash once every 40 seconds to show that the alarm is powered and it has performed an automatic self-test.

By adding more smoke detectors (with RF module), the smoke and heat detectors can form a wireless network of smoke alarms. Only one of the interconnected smoke alarms has to be equipped with the GSM communicator.

The Ei650M RF module communicates with other smoke detectors and heat detectors. Up to 12 (or if you link the correctly, 21) units can be interconnected. The CM2410 fire alarm communicator can be used as backside of this smoke detector and will notify contact persons over the built-in GSM module.

Being a RF smoke detector, no SIM shall be placed in this unit.

This is a smoke detector with RF module. No SIM shall be placed in this unit.

Due to European tax rules, the VAT is adjusted to the destination country at the checkout. Please keep in mind that this may have an impact on the final price you are charged. Dismiss