The Mobeye PowerGuard CM4100 is the power failure monitor and fault detector with a wide range of applications. Understandable, reliable and compact. It has a 4G communication module with 2-G fallback.

The Mobeye PowerGuard CM4100 is the power failure monitor and fault detector with versatile applications. Understandable, reliable and compact. The power source is monitored by plugging the power adapter into a power outlet. In addition, sensors and contacts can be connected to the alarm inputs. The built-in communication module can connect to the 4G LTE-M and the 2G network. Use your phone to monitor for electrical power failures (power outages).

In the event of an alarm, the Mobeye PowerGuard sends alarm notifications by app (IOS/Android), telephone call (voice message), text message and/or e-mail. Your contact persons can be added, with different options for the method of alarm. Reporting to a control room (ARC) is also possible.

The Mobeye PowerGuard monitors the mains power or a 12-24V DC power source. In the event of an outage, it uses the batteries to send the notifications and continuously monitor the inputs. After the power is restored, the contacts receive a recovery notification.

The installation is done in a few easy steps. The PowerGuard unit can be placed freestanding or the mounting holes can be used to hang it on a wall. 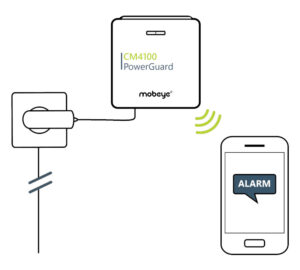 The Mobeye CM4100 is a remote power outage alarm. It monitors the availability of the external power and the status of connected fault contacts. The alarm dialer immediately sends a notification when the status changes. This means you are always well informed.

The Mobeye PowerGuard CM4100 is designed to warn you in situations of power outage. Several reasons can cause a power failure. For those situations where the availability is critical, receiving a power failure alarm can save a lot of troubles. It is hardly impossible to list all examples of applications in the field, but just imagine the effect of a sudden lack of power in your own situation.

Typical applications are monitoring devices such as

The Mobeye power failure alarm system is used by:

But even if the power itself is not the main concern, the Mobeye PowerGuard is a strong tool with its two normally open or normally closed alarm inputs. Any device can be monitored. For these situations you can also apply the Mobeye CM-Guard; the PowerGuard has the advantage that the mains adapter is included.

The Mobeye SIM card and Internet Portal provide full functionality and optimum security. The 4G LTE-M network is very reliable and ensures a strong penetration against low energy consumption 2G is available as a fallback.

When using your own SIM card, the device works (only) on 2G. The operation is “stand-alone”, without using the Mobeye Portal. The alarm notifications are sent via SMS and telephone call to (max.) 5 contacts. Programming is done via (simple) SMS commands.

Every Mobeye monitoring device requires a SIM card for communication. The product comes with a SIM card that can be used for a low cost and immediately provides access to the Mobeye Internet portal. Alternatively, use your own SIM card.

SIM
The Mobeye M2M SIM card gives the device full functionality, including the use of the Mobeye Internet Portal and App.

With the Mobeye SIM card, communication takes place over the 4G LTE-M network with 2G as fallback. When you insert your own SIM card, the device uses the 2G network. Alarm messages are then sent via SMS and/or call to max. 5 telephone numbers.

The Mobeye SIM card is PIN protected and only works in a Mobeye device. Please do not put it in another device. For more information about the Mobeye SIM card, see: mobeye.com/en/sim-cards/. The rate for the use of the Mobeye Internet Portal and the SIM card you will find here.

Free app for your smartphone
The Mobeye Messages app is available for download from the Google Play and Apple App Stores.

Do you want to use the Mobeye SIM card but it was not included in your package? Ask the MobeyeStore team to supply one by filling out the contact form!

Due to European tax rules, the VAT is adjusted to the destination country at the checkout. Please keep in mind that this may have an impact on the final price you are charged. Dismiss